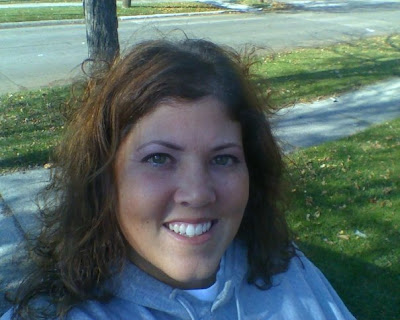 Hey guys for your daily dose of true crime I decided to discuss a 2011 murder that gives meaning to the term ‘bad cop.’

We’re traveling to Buena Vista, Michigan on the night of August 31, 2011, where two Saginaw County police officers arrive at a harrowing scene.

Parked to the side of a secluded road and near the police department shooting range is a Pontiac Aztec with the driver’s door opened and secured from the top luggage rack is an extension cord with its other end wrapped around Jenny Webb, a 32=year-old mother to be (8 1/2 months pregnant). 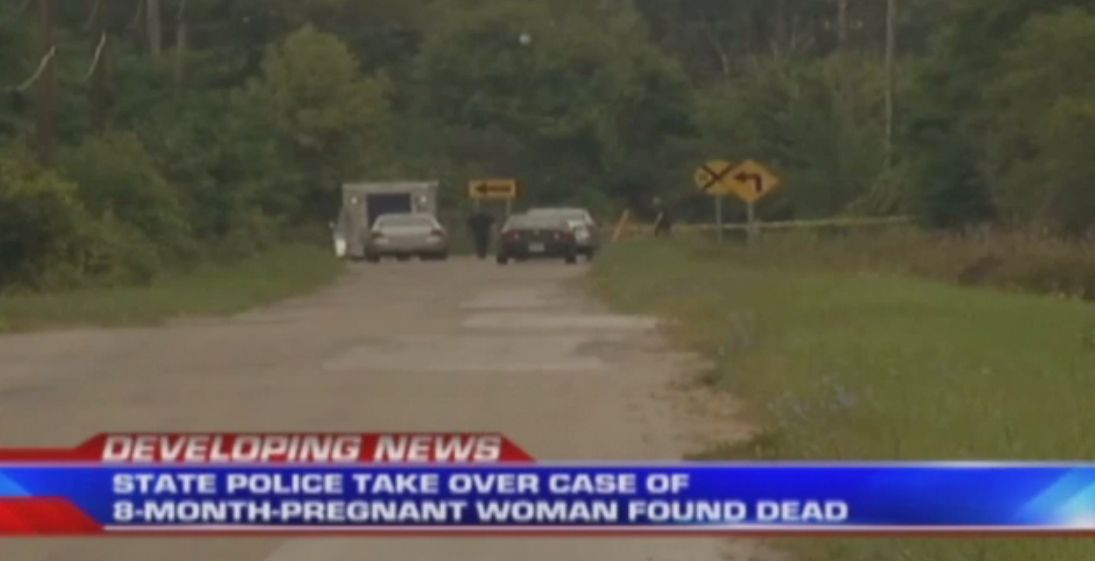 The officers check the deceased woman’s car and purse for any identification. It’s when they reach into her pocket that they pull out what appears to be a typed suicide note.

MY BABY’S DADDY IS A MARRIED COP

Jennifer Webb was, by all accounts, a happy woman looking forward to starting a life with her first child. She rarely discussed the identity of the father; this may be because he was already married. And not only was he married, but he was also in law enforcement. 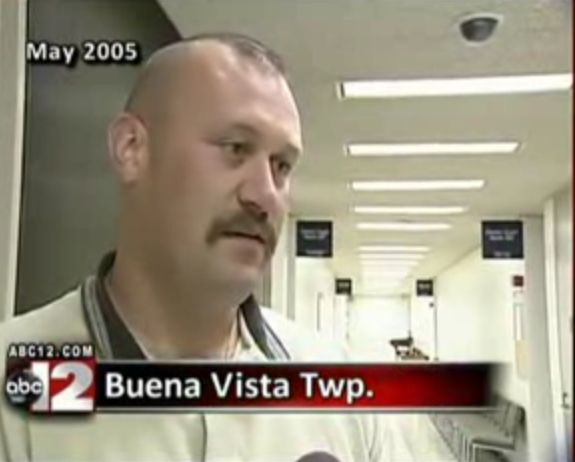 Dawn Webb, the mother, recalls to media sources that her daughter didn’t realize she was even pregnant until month 5, and as far as she was concerned, wanted to raise the baby alone without the help of the already-married father.

The suicided note explained how Jenny ruined her life by getting pregnant, and the only way now is to commit suicide.

If this entire scene seems like a setup, then you are right on the money.

Dawn Webb claimed that her daughter couldn’t have ‘typed’ the suicide note and tells media sources “if Jenny had written a suicide note, it would have been in her handwriting, in a glitter pen, in purple or green or pink. It would have never looked the way it did.”

As Gary Ginther and Valerie Bowman (forensic scientist) began processing the scene, they noticed a pair of discarded flip flops off the side of the road.

Finding this gave them the impression to check around the crime scene as well where they found a trove of crime scene evidence nearly 195 away from where the body lay resting.

A discarded cigarette butt with DNA remnants lay on the pavement. Next to that was a drop of blood and besides that was a single necklace charm (confirmed as belonging to Jenny Webb). 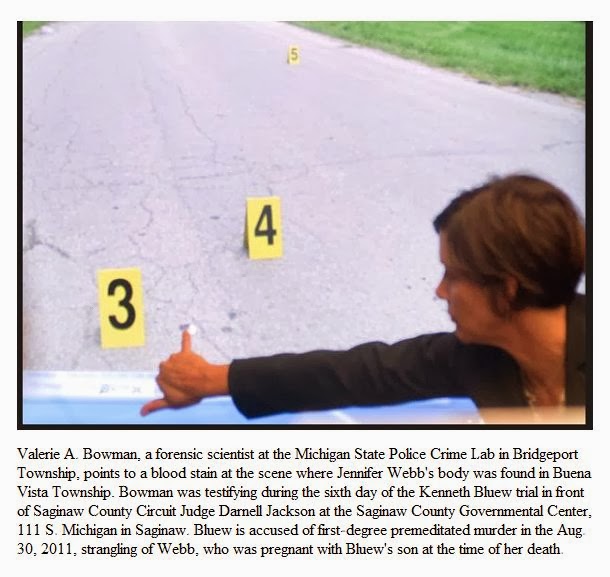 A new theory was now emerging, and by this point, the perspective of a simple suicide became one of homicide. Since most of the evidence was 195 feet away, detectives now knew that the body most likely was moved post-mortem, and most likely moved to the new location in the back of her car.

After her work day ended, Webb went to visit one of her best friends, Andrea King, and help with her newborn twin girls. Unfortunately, Webb wouldn’t stay long as she had plans to meet up with her future baby’s daddy. Andrea King tells sources, “I said, ‘Oh, what are you guys getting up about?’ And she says, ‘We need to discuss this whole child support thing.”

According to Andrea, Jenny Webb was going to be discussing putting the married cop’s name on her baby’s birth certificate.

Remember the discarded cigarette butt found near the crime scene? The DNA analysis came back matching Officer Kenneth Bluew, who happened to be the first officer at the scene.

What’s more is there were even more bloodstains found at the scene, on the extension cord, in Jenny’s car, and even in Bluew’s patrol car.

Det. Sergeant Sean Waterman was on location helping process the crime scene that night along with state police and the crime lab. Sean told sources that as he was working the crime scene, Officer Bluew pulls up in civilian clothes, in which he was immediately ordered to return to headquarters an await an interview. 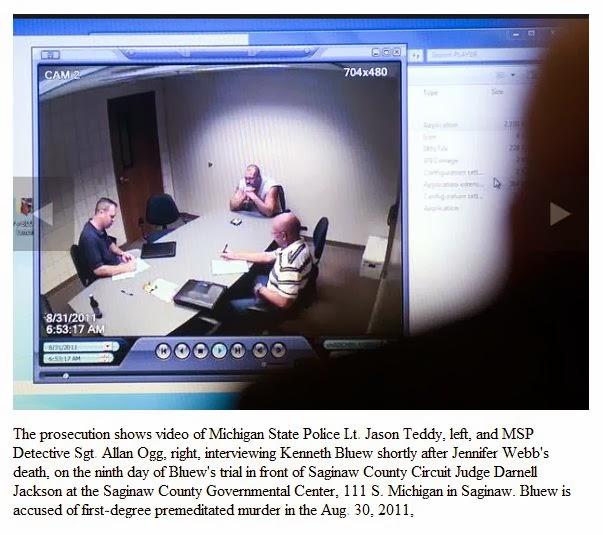 ON DUTY, OFF RADIO

According to Officer Patterson, Ken’s partner, Bluew ‘went dark’ for nearly an hour and a half that same night while on duty. Patterson, frustrated that Bluew wasn’t answering his radio calls, drove to the secluded spot because he knew that’s where Bluew would go when he wanted to sleep on the job.

Only then did he pull up to Bluew’s patrol car noticing that he looked “disheveled” and was sweating. Bluew walked up to Patterson and said that he just found the dead girl and was about to call Patterson.

A search of the recent calls from Jenny Webb’s cellphone showed three calls that night before the “suicide” all to the phone of Officer Bluew, in which Webb had labeled the contact Ken Cop Bluew.

Officer Patterson knew that it was Ken’s number, and this may have been when he began to get suspicious of his partner’s potential involvement.

Court testimony from Dr. Kanu Virani, the Chief Medical Examiner, claims that there was no possible way that Jenny Webb’s death was a suicide, and had to result in strangulation by “chokehold.” 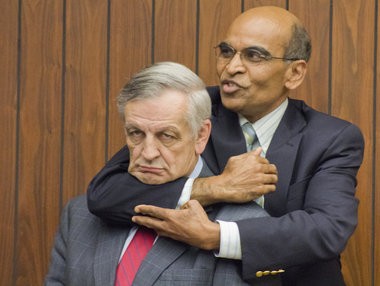 What’s more, Webb had bruisings on her head, arms, face, chest, and neck. Plus the ligature mark from the extension cord was caused post-mortem.

Ironically, in Officer Bluew’s car was a defensive training manual in various types of chokeholds.

The evidence mounted against Officer Bluew was damning already, but detectives found another piece of vital evidence that not only points to the killer but also describes a theory of the crime.

On Webb’s clothing was the tip of a latex glove (the right index finger) and DNA from the blood inside the glove was a perfect match to Officer Bluew. Outside the glove was blood matching both the killer and his victim and also Webb’s saliva. 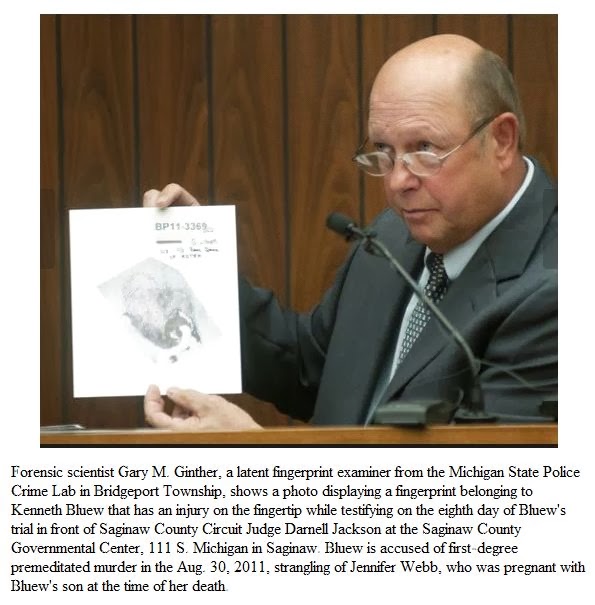 During the of 9:05 and 10:30 pm, when Kenneth Bluew ‘went dark’ on his radio, he was meeting with Jenny Webb. She didn’t know at the time, but her married a cop baby’s daddy went there to kill her; this is evident from the typed suicide note which also showed 14 fingerprints (all his and none of hers). Bluew starts to choke Webb, and she fights back eventually bitting Bluew’s right index finger (from the salvia found on the latex glove tip).

Once he was satisfied that Webb was dead, Bluew puts her in the backseat of her car and drives down the road until he is confident he is away from any potential evidence.

He then wraps the extension cord that he brought from home that day (detectives found evidence of this at Bluew’s house) he wraps one in around her neck and the other around the luggage rack of her car. He then pulls the car off the road and pushes her out the back seat.

Ex bad cop Kenneth Bluew was charged and found guilty of four counts and is now serving a life sentence without parole.

Hey y'all I'm the main story teller on our podcast episodes. You can suggest stories for me to cover through Facebook Messenger. If you want to listen and subscribe to the podcast just search Talk Murder To Me in any podcasting app. Thanks for reading, please share!

Share thisFacebookTwitterRedditEmailThe term “Jane Doe” is one that is commonly known thanks to crime dramas and news reports, but sometimes Jane...

Kristen Hatfield Snatched From Her Bed, Her Cold Case Recently Solved After Police Tested Postive DNA From Neighbor On Underwear

Share thisFacebookTwitterRedditEmailWhen a young child goes missing, the world notices. Kirsten Hatfield, who would have been several decades into...

Share thisFacebookTwitterRedditEmailThe film industry has been under fire quite a bit as of late for the predatory behavior of some men within the...

A Night Out Turns Horrific When 19-year-old Kenia Monge is Drugged, Raped, Murdered, Stuffed Inside a Freezer, Before Being Tossed in a Shallow Grave

Share thisFacebookTwitterRedditEmailKenia Monge, like so many before her, was a young woman who went out for a night of fun with friends and paid for...

An Innocent Slumber Party Ends When 12-year-old Polly Klaas Was Taken In The Night By A Man In The Window, 25 Years Later California Still Shocked

Share thisFacebookTwitterRedditEmailWhen little girls have a slumber party, most parents expect that things won’t get too wild. Sure, they might be...